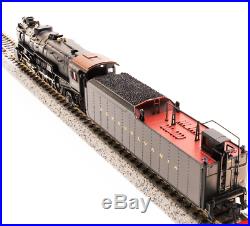 This Engine Comes from Papa's Personal Collection! Engine has been run less than 2 hours. I used this engine to test new track and it is in Perfect Condition, I have used stock photos and engine looks just as clean.

My 16' X 16' Table has almost been completed, but nothing has been put on it yet, Because of health reasons Im unable to finish it. I will be having the table dismantled in the near future. PRR M1a 4-8-2, #6743 Pre-War Version, Paragon2 Sound/DC/DCC. Comes in Clean undamaged MFG Box with padding, Sleeve and instructions. In 1930, the celebrated success of the M1 Mountain-type locomotives.

Prompted the Pennsylvania Railroad to order 100 more locomotives of the 4-8-2 wheel arrangement. The new locomotives became the M1a class and had a longer wheelbase than the M1's due to the addition of the Worthington feedwater heater.

Starting in 1946, 41 of the M1a's received further improvements by increasing the boiler pressure and adding circulators to the firebox. The improved M1a's became the M1b class. The best way to tell them apart is to look for the circulators on the fireboxjust above the running boards.

The circulators are those round objects in a diagonal line that look like wash-out plugs. The PRR M1a/b's were considered to be the finest of the PRR's steam locomotives. And in the end, they even hauled the heavy ore trains, which there were not originally intended to pull. They did it all in style! Paragon2 Sound & Control System.

Recommended Minimum Radius: 9.75 inches. Operates in DC & DCC. (use DCMaster for DC Sound). Records and plays back sounds and movements once or repeatedly for automatic operation. For exceptional high frequency sound clarity.

For multiple whistle lengths and patterns. Choice of 3 selectable Whistles / Horns. Where applicable for locomotive with air horn and steam whistle - both the main whistle and alternate can be easily played. For faster or slower bell.

By adding my E-Bay Store to your Favorites. Check out more items in my store!

The item "N Scale PRR M1a 4-8-2, #6743, Pre-War Version, Paragon2 Sound/DC/DCC PCM-001" is in sale since Tuesday, August 25, 2020. This item is in the category "Toys & Hobbies\Model Railroads & Trains\N Scale\Locomotives". The seller is "papastraindepot2006" and is located in Seaford, Delaware. This item can be shipped worldwide.