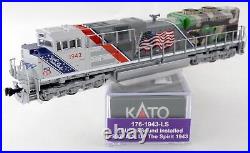 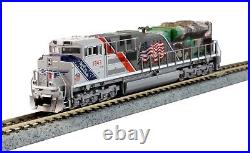 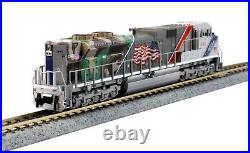 1943, The Spirit, is the 16th commemorative locomotive introduced in the 155-year-old company's history. The Spirit honors the United States' armed forces and the men and women filling their ranks.

Created in collaboration with Union Pacific veterans, the locomotive illustrates the railroad's connection to the thousands of veterans who helped build America through the centuries. Every detail in The Spirit's trade dress incorporates a piece of each U. The Spirit's front is symbolic of Air Force Silver, and the blue stripe is a reflection of the former Strategic Air Command's nose sash.

The lettering inside the sash is the original hand drawn font used on the B-17. It is followed by the Coast Guard's "Racing Stripe" and the Navy's Battleship Gray, which frames Union Pacific's traditional American flag. The military camouflage is a nod to the Army and Marines. As the train passes by, the final message on the tail is dedicated to U.

Prisoners of war and those missing in action, featuring the POW/MIA symbol and its motto, You Are Not Forgotten. Prototype-accurate bolsterless non-radial HTSC truck and five chime airhorn. Exceptional and crisp molding to accentuate the distinct angular lines of the nose and high dynamic brake.

Powerful five-pole KATO motor with dual brass flywheels. Directional Headlight and illuminated, preprinted numberboards. A great addition for any N scale enthusiast & m. However, we may not be able to identify all defects. Please visit us at: Hobby Time Hobby Shop.

The seller is "my-hobby" and is located in this country: US. This item can be shipped to United States, all countries in Europe, Mexico, Japan, Canada, Australia.