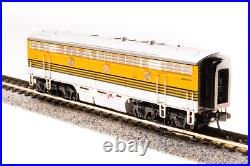 EMD F7B, D&RGW 5603, 5-Stripe Scheme. In fact, more F7s were built than all other F units combined. It succeeded the F3 model in GM-EMDs F unit sequence, and was replaced in turn by the F9. Final assembly was at GM-EMDs La Grange, Illinois plant or GMDs London, Ontario facility.

Many F7s remained in service for decades, as railroads found them economical to operate and maintain. However, the locomotive was not very popular with yard crews who operated them in switching service because they were difficult to mount and dismount, and it was also nearly impossible for the engineer to see hand signals from a ground crew without leaning way outside the window. As most of these engines were bought and operated before two-way radio became standard on most American railroads, this was a major point of contention.