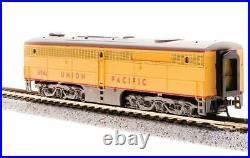 This N Scale Alco PB from Broadway Limited is ideal for your 1940s to 1970s layout. The American Locomotive Company introduced the PA1 locomotive in 1946 to compete with EMD's successful "E" Series passenger diesels. The first PA1 celebrated Alco's 75,000th loco to roll out of the erecting shop.

This attractive 2000HP loco was their high-speed passenger diesel. The PB1 was the matching cables booster used with the PA1, and later could be used with other diesels as well. Having more horsepower than their leading competitor, Alco felt that they had a fleet-ready competitive product. Additionally, their 65'8 bodies became excellent billboard advertising for the railroads that they served with pride.

This detailed Alco PB cabless booster features full Paragon3 sound and DCC for realistic sound and motor control complete with back EMF for smooth slow speeds. The Paragon3 sound system works with all Broadway Limited Rolling Thunder(TM) advanced sound systems. Other features include a heavy die cast body and chassis; smooth-running drive, applied details; directional warm white LED lighting and magnetic knuckle couplers. The N Scale Alco PA set can be operated on all DCC systems as well as on standard DC railroads (with limited sound functionality). This model has wheels profiled to operate on Code 55 and larger rail and curves of 9.75 radius or larger are recommended.