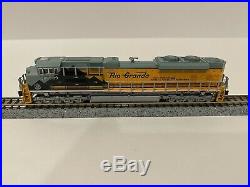 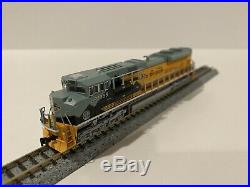 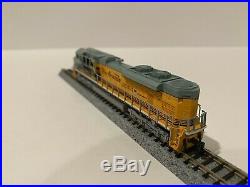 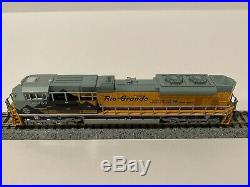 NEW IN BOX - RARE. The SD70ACe is the latest in the line of EMD's "70" locomotives, an evolution of the SD70MAC, although its radiator design harkens more to that of the SD80/90 body.

The SD70ACe has been designed to fit the latest EPA standards and regulations, and sports 4300 horsepower. Road Name History: The Denver & Rio Grande Western Railroad (reporting mark DRGW), often shortened to Rio Grande, D&RG or D&RGW, formerly the Denver & Rio Grande Railroad, was an American Class I railroad company. The railroad started as a 3 ft (914 mm) narrow gauge line running south from Denver, Colorado in 1870. It served mainly as a transcontinental bridge line between Denver, and Salt Lake City, Utah. The Rio Grande operated as a separate division of the Southern Pacific, until that company was acquired by the Union Pacific Railroad.

Today, most former D&RGW main lines are owned and operated by the Union Pacific while several branch lines are now operated as heritage railways by various companies. Three unique body styles to match the railroads who use them. Prototype-accurate bolsterless non-radial HTSC truck and five chime airhorn. Exceptional and crisp molding to accentuate the distinct angular lines of the nose and high dynamic brake. Powerful five-pole KATO motor with dual brass flywheels.

The seller is "dhenvetter1" and is located in Encinitas, California. This item can be shipped to United States.