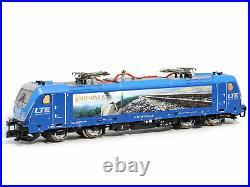 The headlights can be partially or even entirely switched on/off with contact plates. Prototype: The new Bombardier multi-purpose locomotives distinguish themselves clearly from their previous models, and that not only because of the redesigned body of the locomotive. This is a locomotive equipped for the use with 15 kV 16.7 Hz and 25 kV 50 Hz alternating current. It has also a 180 kW diesel auxiliary motor that enables the locomotive to drive even on sections without catenaries("Last Mile").

In diesel operation, all four motors are driven and therefore the starting traction force is as high as in the case of electrical operation. Without hauled load, the locomotive BR 187 with its diesel motor can reach a top speed of 60 km / h; A 2000 tons heavy train can even be accelerated up to 40 km / h. The diesel auxiliary motor has a cubic capacity of 7.150 cm³ and meets the most stringent exhaust gas standards. The tank capacity of 400 liters is sufficient to last in Diesel operation for up to eight hours. Short distances can also be covered with the built-in battery.

The change from electrical traction to diesel traction can be made while driving. Bombardier supplies the locomotives on request - as for the DB AG orders, for example - without the "Last Mile" package.