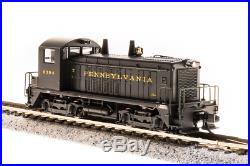 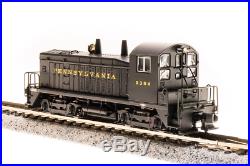 Broadway Limited N SCALE EMD SW7 PRR 9384 Brunswick Green Paragon3 Sound/DC/DCC. EMD SW7 PRR 9384 Brunswick Green Paragon3 Sound/DC/DCC #3883. The EMD SW7 was the third diesel locomotive switcher the builder produced in the SW series and the first new design following World War II in the late 1940s (EMD stopped production on new models until after the war, mostly due to war restrictions ongoing at the time). Outwardly, the SW7 was virtually identical to future SW models and related NW designs of the time although it did differ slightly from the earlier SW1 in that it featured a more streamlined hood without the step in front of the nose. The most striking difference between the SW1 and SW7 was the latters additional horsepower, which was twice that of the former.

As with many early EMD switcher locomotive models, the SW7 continues to see use today in various settings from industrial and shortline operations to tourist and excursion trains. Paragon3 Sound & Operation System FEATURING. With Authentic Sounds and Prototypical Operation in both DC and DCC environments. Integral DCC Decoder with Back EMF for Industry Best Slow Speed Operation in DC and DCC. Precision Drive Mechanism engineered for continuous heavy load towing and smooth slow speed operation.

Operates in DC & DCC (use DCMaster for DC Sound). Record & Play Operation - Records and plays back sounds and movements once or repeatedly for automatic operation.