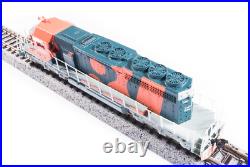 Broadway 6191 N Scale BHP EMD SD40-2 #3097. Introduced by EMD in January 1972, the SD40-2 is one of the most popular diesel locomotives of all time. Between 1972 and 1989, EMD built nearly 4,000 units. These 3,000 horsepower machines were found to be more reliable than higher horsepower locomotives, and the SD40-2 became the standard of the industry for several decades.

The SD40-2 shares a common frame with the SD38-2 and the SD45-2. The frame was lengthened to accommodate the new HT-C trucks, which were 1.5 feet longer than the Flexicoil truck found on the SD40's. With a longer frame, but similar sized long hoods, the SD40-2's have distinctive "porches" on either end. These empty areas are good spotting features for SD38-2 and SD40-2 locomotives. The SD40-2 can be further distinguished from the SD38-2 by its three roof-mounted radiator fans and a single large exhaust stack.

There are several variations of SD40-2 in service. In our 2021 production, we are modeling the original standard SD40-2, and a second version with a high short hood. We are offering models in twelve prototypical paint schemes and one unpainted version of the short-hood model.