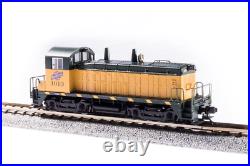 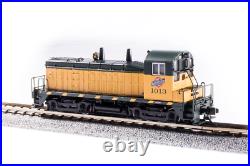 The NW2 was 44 feet long and equipped with the standard B-B truck arrangement. Typical distinguishing features of the NW2 switchers include two stacks in the middle of the hood, a half-height radiator grill on the front, no sand box on the front platform, no small louvers at the front corners, and the tops of the front cab windows are curved to match the curve of the roof. Our model is of the phase V locomotives. The main difference between the Phase V and the Phase 1-4 NW2's is the slope of the long hood just ahead of the cab. In this production, we are offering models in eight prototypical paint schemes and also one Unpainted version.

Dual and Single Headlight Options Accurate for Each Paint Scheme. Prototypically Accurate Sounds for the EMD NW2 Switchers. Will Operate on Code 55, Code 70, and Code 80 Rail.

This item is in the category "Toys & Hobbies\Model Railroads & Trains\N Scale\Locomotives". The seller is "onlyengines" and is located in Boiling Springs, South Carolina. This item can be shipped worldwide.