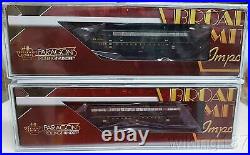 N 1:160 scale model made of ABS Body with Die Cast Metal Chassis and fully assembled. Detail, fit and finish are excellent quality. Model will compliment your model train layout, military diorama, architect display or just as a collectible of its own. In fact, more F7s were built than all other F units combined.

Note: the B unit is often referred to as an F7B, whereas the A unit is simply an F7. For clarity, BLI refers to A units as F7A. Many F7s remained in service for decades, as railroads found them economical to operate and maintain. However, the locomotive was not very popular with yard crews who operated them in switching service because they were difficult to mount and dismount, and it was also nearly impossible for the engineer to see hand signals from a ground crew without leaning way outside the window. As most of these engines were bought and operated before two-way radio became standard on most American railroads, this was a major point of contention.

Recommended Minimum Radius: 9.75 inches. Operates in DC & DCC (use DCMaster for DC Sound). Record & Play Operation - Records and plays back sounds and movements once or repeatedly for automatic operation. 16-bit Sample Rate for exceptional high frequency sound clarity. Alternate Whistle / Horn where applicable for locomotive with air horn and steam whistle - both the main whistle and alternate can be easily played.

This item is in the category "Toys & Hobbies\Model Railroads & Trains\N Scale\Locomotives". The seller is "wiking187" and is located in Towaco, New Jersey. This item can be shipped worldwide.