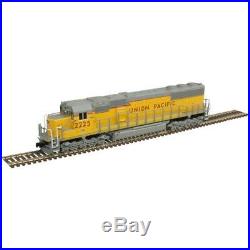 Atlas 40003981 - SD60 w/DCC Sound Union Pacific 2225 - N Scale. EMD introduced the SD-50 in the early 1980s with a 16 cylinder, 3500 h. Engine to attain the power that they had early gotten from a 20 cylinder locomotive. The new, longer frame allowed the dynamic brake resistors to be relocated to a cooler area found between the central air intake and the cab. The SD-60 varied little from its predecessor visually, the main changes taking place internally with the aging 645F engine being replaced by the 710G.

The two locomotives can be distinguished by the door panels; the SD-50 features four latched doors in six door panels whereas the SD-60 has six latched doors in eight door panels. The "wide nose" or "safety cab" was first offered as an option to US railroads in 1988. Union Pacific received the first units in early 1989. In 1991, the contour of the nose was changed slightly, going from a 3-piece to 2-piece windshield and tapering the sides of the nose to improve visibility for the crew. Burlington Northern was the first recipient of the revised model.

Separate plow and winterization hatch that can be installed by the modeler. Slower speed motor for closer to scale speeds. DCC Models are equipped with NCE Decoders.

DCC OPERATION FEATURES (GOLD LOCOMOTIVES ONLY). DCC includes RailCom and RailComPlus, with 14, 28 or 128 speed steps and with 2-digit and 4-digit addressing. Flexible mapping of function keys F0 to F28. A total of 6 DCC function outputs are available, and all can be function mapped (disable, brightness, light effects) individually. Follows all NMRA DCC standards and recommended practices.

If you meet your obligation why should you have to wait. We do appreciate all of our customers but occasionally a problem does arise.

Canada, United Kingdom, Germany, Japan, and Australia. We will be listing new items every week so come back and see us soon.