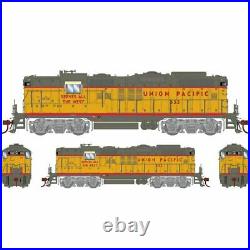 Athearn Genesis 82338 - EMD GP9 w/ DCC & Sound Union Pacific (UP) 333 - HO Scale. {Title}UP FEATURES: Phase III Cab Unit- First time in Genesis Dynamic brakes Underframe mounted bell Phase I B-units Winterization hatch UP's Phase III GP9's began service on the UP in 1957 lasting into the 1970's. While the majority of these 300 class units were modified significantly there were 5 that survived in their as-built configuration all the way up until retirement. We are offering 3 of them in this production run. UP's fleet of 75 Phase I GP9B units were built in in the Spring of 1954 and remained in service until the mid-1970's.

These ubiquitous units could be seen in service system wide on mainline freights as well as branch line locals. They could also be seen with in service assisting Veranda Turbines. The basic design followed most diesel switchers with the addition of a short hood instead of an end-cab. The hoods were also full height to better accommodate the diesel engine and mechanical and electrical components.

In 1954 EMD upgraded the GP7 to become the 1,750 horsepower GP9. Externally, the first GP9s were virtually unchanged from the last GP7s. Later versions would include different louver arrangements and the last ones would come without the frame skirting. Many railroads chose to rebuild their GP7s and GP9s for continued service. Often times, it was cheaper to do this rather than purchasing brand-new locomotives.

Please see description above for the road number. Phase III Cab Unit- First time in Genesis. UP's Phase III GP9's began service on the UP in 1957 lasting into the 1970's.

Sorry, our items are NOT available for pick-up. No additional information at this time. Atlas 551 - HO Scale Code 83 to Code 100 Transition Joiners (12).

Athearn Genesis 71547 - EMD DDA40X Union Pacific (UP) 6911 - HO Scale. This item is in the category "Toys & Hobbies\Model Railroads & Trains\Railroads & Trains\Locomotives". The seller is "midwestmodelrr1" and is located in this country: US. This item can be shipped to United States.