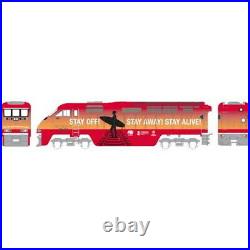 Brand Names You Can Trust. Add our store to your favorite stores and receive our exclusive emails about new items and special promotions! Athearn ATH15362 N Scale Locomotive F59PHI w/DCC & Sound Amtrak #455. Brand New in Factory Packaging. In Stock Ships Within 24hrs. Detailed Information AMT FEATURES: The AMT operates Montreals commuter rail, it is the second busiest system in Canada after Torontos GO Transit. Latest paint variant AMTK FEATURES: Amtrak began a campaign for better rail-safety awareness in the late 2000s. Several locomotives in Northern California (CDTX 2007) and Southern California (AMTK 455) service received these stylistic, full body printed, vinyl wraps. These locomotives provided a splash of color with their eye catching graphics. The F59PHIs locomotives were re-lettered for their new owner and rushed into greater Chicagoland service. It features an isolated cab, lightweight body, and a streamlined shape, features that were absent on the original commuter F59PH. First built for the California Department of Transportation(CDoT), the F59PHI has seen service in all four corners of America, (Mostly seen in California) as well as in the Pacific Northwest/Montreal area in Canada. In 1990, the State of California passed a bill that would result in massive funding for the state transportation systems. It also resulted in a separate, state funded system of regional Amtrak routes. CDoT wanted a locomotive that was both reliable and attractive. They approached EMD, who responded with the lightweight, high-speed F59PHI locomotive. Soon after, more orders arrived. Amtrak ordered 21 of these locomotives for their Pacific Sufliner service (separate from Amtrak California), and the North Carolina Department of Transportation also selected it as their primary motive power. West Coast Express (operated by TransLink) in Metro Vancouver, also selected it for starting up its service. Montreals Agence de Metropolitaine de Transport bought 11 of these locomoties to go with their Bombardier Bi-Level coaches, which were just arriving. The F59PHI was produced until 2001.

It was taken off of EMDs lineup because it wasnt able to meet the EPA Tier 1 regulations. Some of Amtrak Californias F59PHIs have been rebuilt by EMD, these are ECO repowers.

Sound Transits 2015 budget outlines plans to overhaul seven F59s and four of those will be overhauled to Tier 3 standards. Please note: I will not put less amount on custom papers, so please don't ask. You can return any item in Brand New/unopened condition (within 14 days). The item "Athearn ATH15362 N Scale Locomotive F59PHI withDCC & Sound Amtrak #455" is in sale since Tuesday, August 25, 2020.

This item is in the category "Toys & Hobbies\Model Railroads & Trains\Railroads & Trains\Locomotives". The seller is "power_hobby" and is located in Mahwah, New Jersey. This item can be shipped to United States, all countries in Europe, Canada, Australia.